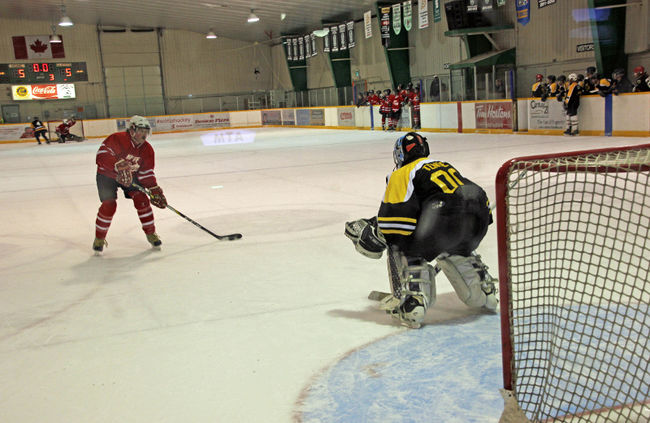 CNL employee Dwayne Schultz (playing for the Building 405 team) takes a shot on the net of opposing team Building 409 during the overtime period of their game on Jan. 13 for the Black Bears Hockey Tournament at the Petawawa Civic Centre. After reaching a tie of 5-5, Building 409 ended up firing the winning goal in overtime.

The tournament was founded in 2006 to help raise funds for a CNL staff member who had a child in distress, as well as a community charity that focuses on being able to help those with a child or family member who suffered a trauma.

From Jan. 11-13, CNL Chalk River employees and retirees geared up in hockey attire and took to the ice at the Petawawa Civic Centre for the annual charitable hockey tournament.

A total of eighteen teams from three divisions – A, B and 45-plus – faced off in the friendly competition over the course of three days.

But while there were many winners on the ice that week, the real winners were the three worthy causes that the teams were playing for.

The Deep River and District Hospital along with the Pembroke Regional Hospital will each receive $8,500 while this year’s individual recipient is Kiara Ronan who will receive $10,000.

The Deep River and District Hospital was selected as it is the closest hospital to the Chalk River nuclear site, so it serves as a community organization close to the hearts of CNL employees. The hospital requires financial resources to sustain the services it offers and to meet the changing demands of the community. As the Ministry of Heath does not fund all of the health care requirements, the funds will be going towards the replacement of capital equipment including IV pumps.

The Pembroke Regional Hospital was selected as it is another exceptional organization that serves the entire region. Funds will go towards the new orthopaedic surgery unit to help build upon the state-of-the-art services offered at the hospital by providing funding for new equipment to deliver optimal care to patients.

The final recipient, six-year-old Kiara Ronan, is the daughter of a CNL employee. In April 2016, Kiara was diagnosed with Minimal Change Disease – a kidney disease in which large amounts of protein is lost in the urine – as well as Thin Membrane Disease. Kiara and her family have been back and forth to the Children’s Hospital of Eastern Ontario (CHEO) for many appointments over the past seven months. The family is hoping that the treatment over the next two years will put the disease into remission, but there will always be a chance of relapses. The portion of the funds from the hockey tournament will go towards the Ronan family to offset medical costs and offer support to the family during this challenging time.

“One of our recipients is always a direct relative to somebody that works at CNL that’s going through a tough time and could use a little bit of help,” said Danny Venne, tournament co-organizer.

Venne said that he was humbled by the support that CNL employees and sponsors showed towards this year’s effort.

“We’ve raised about $88,000 over the past 12 years of having this tournament. Last year we made $20,000 and this year it’s $27,000” said Venne. “Every year it gets bigger and bigger, I guess because we’re becoming a little bit more well known. People are calling us up to make donations because they know it’s going to a good cause. So the support seems to be growing along with the tournament.”