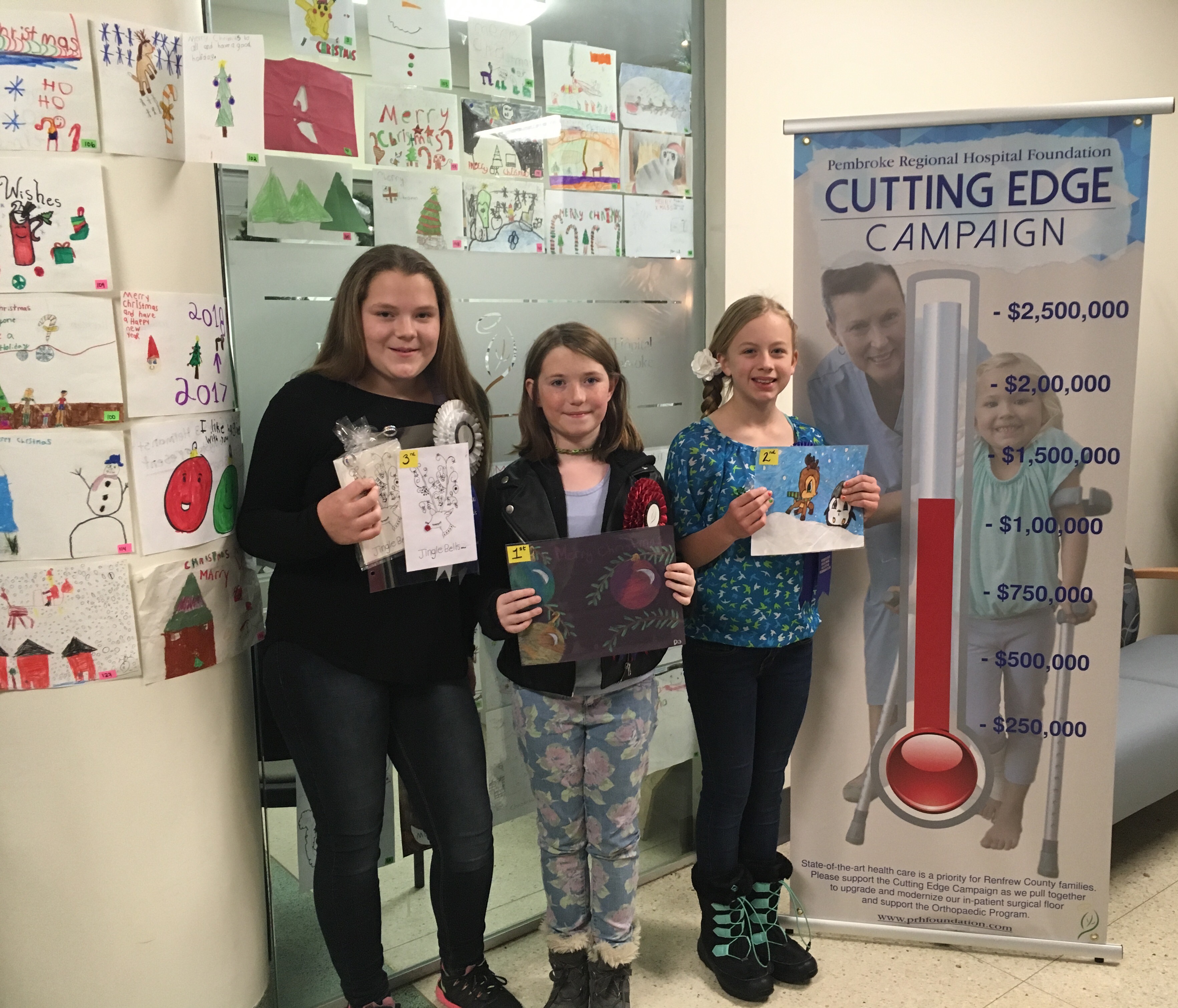 By Célina Ip, Wednesday, December 13, 2017 4:02:06 EST PM / The Daily Observer. Three local students have been granted an early Christmas wish: their festive designs have been printed on greeting cards to raise funds for the Pembroke Regional Hospital Foundation.

Each year, in the spirit of the holiday season, the PRH Foundation hosts their friendly Christmas Card Contest which invites any students in Grades 1 through 8 across Renfrew County to submit their original holiday-themed designs to be featured on the Foundation’s annual Christmas cards.

For this year’s third annual Christmas Card Contest, from an impressive 167 submissions, the Pembroke Regional Hospital staff and volunteers had four days to vote on the artwork on display by the Foundation office and narrow it down to the top three.

“When we first started this three years ago, initially we thought we were just going to choose one Christmas card. But when we got them all in, the pictures were so incredible that we couldn’t just pick one Christmas card, so we picked three. Even at three, as you can see, we could turn them all into Christmas cards because everyone has done such a fantastic design,” said Nancy Warren, executive director with the PRH Foundation.

On Dec. 12, the Foundation held a special ceremony to honour the artists and present them with awards.

The 2017 winning cards were designed by Cobden Public School’s Danica Smith and Brooklyn Tomasini along with Our Lady of Sorrows’ Ava Allen.

First place was awarded to Smith for her card that showcased colourful Christmas ornaments surrounding the phrase ‘Merry Christmas’, Allen achieved second place for her design that featured a reindeer and a penguin, and Tomasini placed third for her ‘Jingle Bells’ card featuring Rudolph.

“It’s my first year doing this, so it’s mind-boggling and crazy that I won first place,” said Smith. “I’ll definitely be doing it again next year.”

Warren thanked the students and expressed that the PRH Foundation is fortunate to have many generous supporters, both big and small.

“I’d like to congratulate you all, as each of you came out on top as a winner,” said Warren. “What we do with this fundraiser is we turn your designs into Christmas cards and then we put them into packs of six and we sell them to raise funds for our Cutting Edge Campaign. So you can be proud at knowing that when the hospital is upgraded, that you’ve helped to bring those services to people in Renfrew County.”