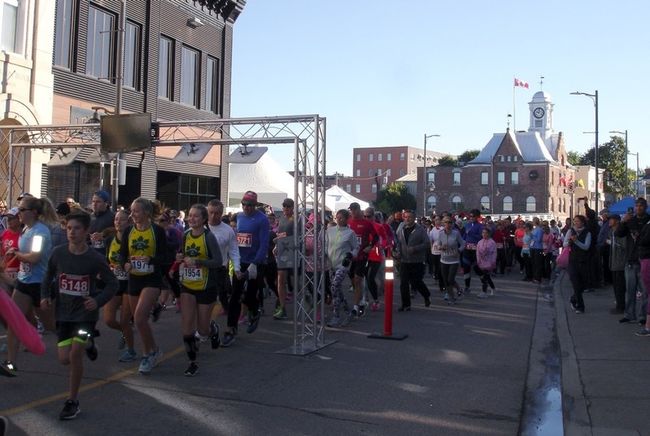 By Shawn Chase, The Daily Observer

It may have been a week early, however, that didn’t deter hundreds of sprinters from getting into the Thanksgiving spirit during the 13th annual Dr. Kim Armstrong Turkey Trot.

Once the horn blasted, more than 300 participants running, fast walking or strolling set out on designated five-kilometre or 10-kilometre routes that took them through Pembroke’s downtown core and waterfront. and then back through the downtown core. Later, kids and parents joined in the family obstacle course.

The late Kim Armstrong was a chiropractor, was well-known and liked as a successful athlete, adventurer and a warm and generous person. She loved running, talking part in triathlons, marathon running, competitive mountain biking, parachuting and heliskiing to name a few. Her mother, Dolores Armstrong, was overwhelmed with the community’s response.

“It has a legacy of its own and it is a wonderful event,” she said. “My daughter was very athletic and she would have been floored by this.”

The warm fall weather, as well as the new venue, contributed to this event’s success. This year’s run was moved from the Thanksgiving weekend to coincide with the Downtown Funk Street Party, a decision that appears to have been a good one, said Pembroke Regional Hospital CEO Pierre Noel.

“There was some really great feedback about having it downtown and having it team-up with the downtown funk party,” he said. “It was a really good thing for both events.”

Proceeds from this year’s event will go towards the $2.5-million Cutting Edge Campaign to upgrade the in-patient Surgical Floor and to support the Orthopaedic Program at the Pembroke Regional Hospital. The overall cost of the project will be $11.5 million. The Turkey Trot Committee is pledging $25,000 to sponsor one of the 12 new day surgery recovery bays as part of the campaign. The run also supports a high school bursary in Kim’s name.

“It’s a very exciting project,” said Pembroke Regional Hospital Foundation executive director Nancy Warren, a friend of Armstrong’s. “It’s great for our hospital where we keep moving forward and a lot of people have come out today to help support that.”